Imagination is Your Limitation: Life is a journey that takes us to unexpected places. Horses for me have been an integral part of this, I hope this story encourages even one person to believe anything is possible whatever your situation - dream big and just go for it.

My teacher at primary school once told me I had no imagination. Little did she know I was pony mad – in a dream world where my imagination ran wild. I spent many hours pretending to be a pony, “cantering around the garden,”jumping”and “prancing” – hoping one day I might be lucky enough to have one I could call my own.

On my 5th birthday my dream came true (probably because my parents wanted some peace!). A shetland pony named Billy Bandit was now mine. There was one condition – I was to look after him come rain or shine. To me that was heaven. My parents taught me that with hard work, determination, dedication and commitment I could achieve anything. 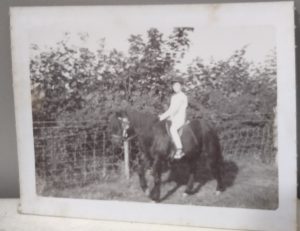 Money was very tight, I learned that sacrifices were part and parcel of even day life and that regardless of background having a positive mindset meant challenges were faced head on. Horses shaped my life.

Horses had taught me great life stills which I came to fully appreciate in 2005 when a riding accident caused significant injuries. At the age of 42 my life was now full of challenges at the most basic level- how to stand up without falling over. Head and nock injuries had wrecked my balance and coordination, my brain had very little idea of where my body was in relation to its surroundings, and neurological deficits compounded this.

Bouts of severe vertigo and sickness where I had to lie still for days at a time (usually in hospital attached to a drip) tested my positivity to the limit. I worked tirelessly during rehab but life was tough. I improved a little but daily tasks were ridiculously difficult, but my upbringing and life skills | gained from horses meant I was not a quitter. In 2008 I saw a glimpse of dressage at the Paralympics – I thought I could do that, I saw in my imagination a possibility arising from what seemed an impossibility of ever riding again. 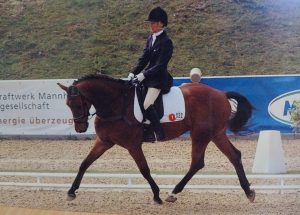 It became evident my accident was life changing, the complexity of injuries not found in any textbook. It would now be up to me to discover through trial and error how to manage my disability. Balance is an incredibly complex system, taken for granted but when not functioning correctly affects vision, movement and spatial awareness. Add neurological deficits into the mix movement with horses was obviously not conducive to my condition!

But I had a dream…

A lifetime training horses and riders and having spent a decade training with a pioneer in horse/ wider bio mechanics, I took this knowledge and started a journey unto the unknown, It gave me focus, using all the skills I had developed over decades to create adaptive techniques so I could ride again. Over time through experimenting, I had to discover optimum time in the saddle, how to reduce field of vision and spot focus to reduce vertigo and block out the brains “noise” and its influence on decision making. Motion distortion and lack of spatial awareness had a big role to play as the increased symptoms of “stressing” my balance and neurological system when riding was not only mentally exhausting, physically it floored me.

Sitting on a horse for a short time (when | could lose my balance sitting on a chair) left me unable to do anything for days -I didn’t realise the enormity of the goal I had set. With dogged determination (some would call insanity) I carried on as I had a plan. London 2012 was tantalisingly close but I had the privilege of being selected to ride at the Olympic Test Event in 2011 as well as representing Great Britain and winning at international level. My childhood dream of riding for Britain had been realised. Para dressage was put on the back burner when other injuries ruled out further progress.

I made the decision in 2017 after numerous operations on my foot and shoulders to call it a day. But after 4 years without a horse, the stress of COVID and also losing my mum who supported me throughout, I wanted to challenge myself once again. I had leant from a young age if you have the desire anything is possible – your imagination will either help or hinder. Eventing had been my old passion, so how about jumping?

I challenged myself in 2021, age 58, to give it a go. Not having jumped for over 20 years and only walking and trotting after my accident, I set about finding an establishment that would take me on, Several declined (not surprising!), then I came across the Cavalier Centre. With the expert eye of Annabel and my equine partner Star (who is a star!) I learned more adaptive techniques to accommodate motion/speed distortion and spatial awareness exacerbated by this new discipline. Muscle memory was a godsend, muscle use was crippling but the mental high was amazing!

I progressed from learning how to canter, walking over a pole, hopping over a tiny cross pole with Star looking after me to now jumping 60cm. The icing on the cake was qualifying for the RDA National Championships 2022 Level 3 show jumping.

As for me – whats next? The Nationals of course, then who knows? 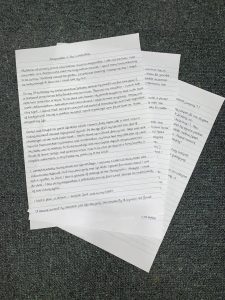